Art Olympic Theater is back with a new title, ART OLYMPICS.  The next show is Saturday, September 17th, 2016 as part of Re:NEW Festival.  For more information visit my main website, Tom Sarver Projects.

A mingling of team members. David Pohl pauses for a photo moment with Julie Mallis. Photo by Jen Saffron. 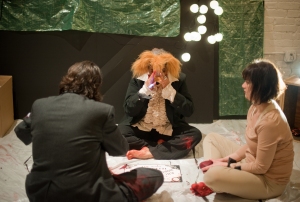 Julia Cahill gives her artist statement at the start of the show.  Photo by Lindsay O’Leary.

Kristen Barca applied to the canvas like paint. L.O.

The Anachronistic Rites of the Mundane. L.O. 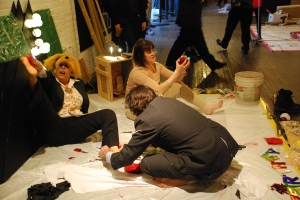 The contest was almost too close to call last night at the Mattress Factory.  In the end, team Rack Jeacher led by Julia Cahill came out on top.  Three judges scored the event.  The winning spot was decided by one point.  Images from the show will be published in a few days.  Thank you to everyone who helped to make Art Olympic Theatre a success!

Trophy to be awarded to the winning team.

The Half-time show trophy will be awarded to a member of the audience.

Two prizes will be awarded at the upcoming Art Olympic Theatre event.  One will go to the winning team, as selected by a panel of judges.  The other will go to the member of the audience who is victorious in the one-on-one shoe box installation challenge.

The doors for Art Olympic Theatre at the Mattress Factory 35th Anniversary Bash, this Saturday, February 23rd, open at 5 PM.  Judges for the event are Janet Sarbaugh, Langston MacDiarmid and Karen Hartman.  Pittsburgh City Councilman Bill Peduto is the special guest judge for the halftime show.

5:15  Opening ceremony.  Teams (and their suitcases of materials) are presented to the audience and judges.

Christiane D. Leach has selected Kate Hansen and David Pohl as teammates.  Christiane D. and company plan an artistic journey that may include music, poetry, film,  and songwriting.  They are the Anachronistic Rites of the Mundane.  The ARM with be presenting their manifesto at the opening ceremony Art Olympic Theatre.

The next team led by Nina Barbuto is shrouded in mystery.  They are en WRAPture.  Barbuto has selected Kara Skylling (once an official member of the Art Olympic Theatre Crew) and the elusive thatch as her teammates.

The third team, Rack Jeacher is led by Julia Cahill, whose work is currently on view at the Mattress Factory.  Cahill is a record-holding bubble blowing champion, but that is all that can be revealed about her before the contest. She has selected Julie Mallis and Anna Coufal as team members.

Julie Mallis is a visual artist who explores perceptions through painting and new media. Through video projection and installation art, she creates synesthetic experiences for the viewer.

Anna Coufal is not at liberty to disclose her current profession. When she’s not on duty, she likes to spend her time listening to stories, solving puzzles, and treating every day like the eternal jam that it is. 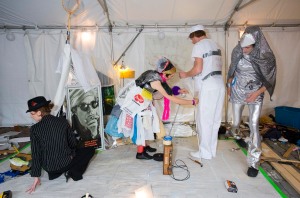 Mike Cuccaro moderates a half-time competition between Judy and Flora 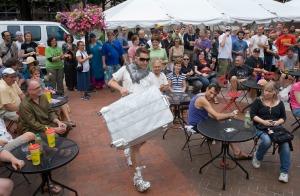 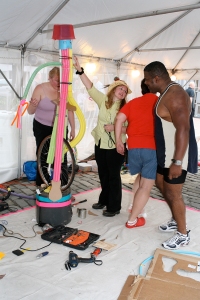 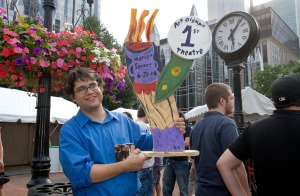 Tom Sarver with the Art Olympic Theatre Trophy (made the morning of the event). 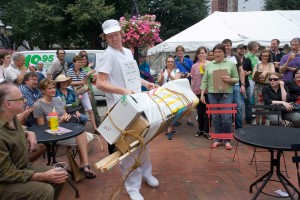 Judges look on as team materials are hauled in. 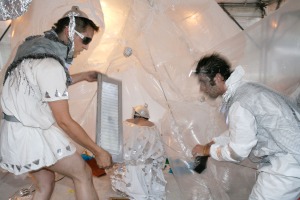 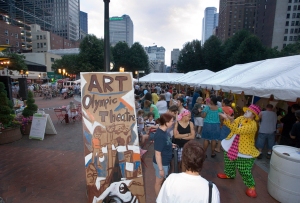 AOT returns to the Mattress Factory on February 23, 2013

Art Olympic Theatre returns to the Mattress Factory for the museum’s 35th birthday celebration.  The contest starts at 5 PM with teams led by Pittsburgh artists Julia Cahill, Christiane D. Leach, and Nina Barbuto.  Tom Sarver and Mike Cuccaro will be officiating the event.  At 7 PM, a team of judges will be announced the winner.  For more information, check out the Mattress Factory Website.

Art Olympic Theatre is back in Pittsburgh for the Sprout Fund’s 10-year retrospective event, TENACITY.  Tom Sarver and Mike Cuccaro will be emceeing the contest as three Pittsburgh celebrities compete in PUPPET MAKING CHALLENGE!

Many other amazing acts will be at TENACITY.  For tickets click HERE.